Modifying the Code of Life

Medicine has advanced to the point that modifying the genetic code of humans is no longer a dream, but a reality. While loaded with potential to save and improve lives, misuse and mistakes carry dire consequences.  How do we ensure both safety and progress at a global level?

Eric Olson holds the Annie and Willie Nelson Professorship in Stem Cell Research; the Pogue Distinguished Chair in Research on Cardiac Birth Defects; and the Robert W. Welch Distinguished Chair in Science at the University of Texas Southwestern Medical Center. The regenerative medicine specialist led a discussion during the George W. Bush Presidential Center's recent Forum on Leadership about how gene editing is changing medicine.

After his presentation, Dr. Olson spoke with The Catalyst's William McKenzie and Amanda Huber about CRISPR, the gene-editing technique that he and his team of scientists are using to try to fix DNA mutations that lead to heart and muscle diseases. He also emphasizes why a global discussion needs to occur about the possible misuses of technology to alter the DNA sequences of humans and any other organism. As he says, the ability to edit genes is changing the code of life and that can have potentially positive and possibly adverse consequences.

Exactly what is CRISPR?

CRISPR is a gene-editing tool that makes it possible to change the DNA sequence of any organism, animal, plant, or human. It can edit, delete, and insert a sequence of a gene. So, it has enormous power for correcting errors in DNA that cause disease.

CRISPR is a gene-editing tool that makes it possible to change the DNA sequence of any organism, animal, plant, or human.

How does it do that?

You could think of it as a pair of molecular scissors that can cut DNA. The second component is a molecular GPS device that can recognize any sequence of the DNA that you design it to recognize. It can deliver the molecular scissors to the selected DNA sequence and cut the DNA. It’s very fast and efficient. And it can find any single letter out of billions of letters and modify it.

How do you use this in your line of research?

We use it as a standard tool for all sorts of gene manipulations in the laboratory. But, clinically, we’re trying to develop it as a way to remove mutations that cause muscular dystrophy.

We've corrected many different human mutations in cells from patients using this gene-editing tool. And we’ve corrected mutations in mice and other large animals that have muscular dystrophy, so we’re moving quickly towards clinical studies.

How will CRISPR affect medicine?

In the near term, CRISPR provides an unprecedented opportunity to treat human disease. If you know the error in DNA that causes the disease, you can potentially cure it with this technology.

In the near term, CRISPR provides an unprecedented opportunity to treat human disease. If you know the error in DNA that causes the disease, you can potentially cure it with this technology.

Clinically, the first indication will likely be as a therapy for blood disorders and cancers. For blood disorders, you can use it to remove a mutation that prevents the production of normal hemoglobin, which is the protein that carries oxygen in the blood. And in cancer, it’s being used to modify immune cells so that they will recognize cancer cells and destroy them.

So the impact for patients is going to be substantial.

CRISPR has enormous potential for patients, but you have to know the DNA sequence that you want to correct or change. If it’s a disease for which the underlying genetic basis is not clear, then CRISPR would not be appropriate.

What about things that we create but don’t know the unintended effect?

That’s one of the risks. The technology has progressed faster than the regulatory rules to govern it.

That’s one of the risks. The technology has progressed faster than the regulatory rules to govern it.

If you want to get into the dark side of CRISPR, this technology could have adverse consequences. One could be what’s called "off-target effect." You can deliver this to any DNA sequence, but what if it inadvertently goes to some other sequence where you didn’t want it to go and it makes a permanent change to the DNA? That could have adverse effects.

The other adverse consequence is editing of the germ line, which is sperm and eggs. It is the cells that transmit genetic material to all future generations. If you make a change in the germ line, and that change is deleterious, in some ways it’s too late. The genie is out of the bottle. Such a change could flow through the future of humanity, and you can’t ever get it back.

There are currently no restrictions against human germ-line editing. There’s a recommendation by the U.S. National Academy of Sciences that we should proceed with caution, but it’s not illegal.

What does “proceed with caution” mean?

It means be careful, but there’s not at the present time a prohibition on the editing of the human germ line. The technology is there. We do it in mice all the time. And you could do it in people but it hasn’t been done yet. I believe it will eventually be done within a decade or so because you can’t stop technology.

Jennifer Doudna, CRISPR’s co-inventor who wrote A Crack in Creation, warns that an even greater pest might arise if we get rid of, say, mosquitoes.

There are two major issues if you use it to eradicate a species like mosquitoes for malaria.

One is what you said, you don’t know the unintended consequences of eradicating a species in the broader ecosystem. It could have a domino effect on other organisms, so that’s a tricky business.

The other part is whether it is ethical. Who are we to decide to eliminate a species from the earth because it gives us mosquito bites or causes a human disease? Who's going to make that decision?

I don’t want to get into all the details, but there is a process called gene drive, which is really interesting. You can modify a gene in a population of animals and do it in such a way that it’ll confer an advantage. Then, if that animal is released into the population, it can perpetuate that modified gene throughout the entire population.

This is currently being explored as a strategy to eradicate malaria. The [Bill and Melinda] Gates Foundation has put a large amount of money into research on gene drives as a possible means of eradicating malaria. Gene drive also is being pursued as a means of eliminating antibiotic resistant bacteria.

Who should take the lead in regulating this new world of science?

There is no formal mechanism for regulating CRISPR gene editing across the globe, and it needs to be a global discussion. How do you control the development of some of these technologies in non-transparent societies? China already has edited human embryos. They didn’t take them to conception, but they edited them in a dish to show that it could be done.

There is no formal mechanism for regulating CRISPR gene editing across the globe, and it needs to be a global discussion.

So, it is simple. But you don’t know when a rogue nation might weaponize the technology.

I’m not trying to set off alarm bells but we’re talking about modifying the book of life. I mean it’s the genome. That’s as profound as it gets.

There are a lot of bioethicists writing on this. Jennifer [Doudna] talks about some of this in her book. She sets off the alarm bells about changing evolution. And maybe this is the natural course of human evolution, to evolve to the point that we’re smart enough to change ourselves.

If we cure disease and live longer, obviously this is going to have some impact on our federal budget. How do we sustain programs like Social Security and Medicare over time? We already have a difficult time sustaining them.

You could say that about eliminating polio or the bubonic plague. Mankind is driven to improve the health of the species. It seems like the health care system catches up with that eventually.

Gene editing works really well and in some situations it will be applicable to disease treatment. But there will be other situations in humans where it will be challenging to use it. That will probably be on a disease-by-disease or case-by-case basis.

Since you are devoting your life’s work to this, you must see a net positive effect?

I’m dedicating my career to it now because I want to do something big and important. I don’t want to dot the i’s and cross the t’s for my remaining time on this earth. For a scientist to be able to modify the code of life is really exciting. It doesn’t get much better than that. I’m not the driver of the revolution, but to just be on board and doing my best to contribute with our group, that's exciting. Yeah, I’m all in.

For a scientist to be able to modify the code of life is really exciting. It doesn’t get much better than that.

In closing, let's talk about your work with muscular dystrophy. What impact might that be having with MD?

My entire career has been dedicated to studying muscle diseases, and muscular dystrophy is the holy grail. There has been nothing effective in this disease despite a lot of effort.

This is the first possible therapeutic approach to treat the cause of the disease rather than just the symptoms, which is what is so powerful. We know the cause. It is an error in DNA. In the simplest terms, you fix the cause, you fix the disease.

If you have dedicated your life to studying a problem, it's really motivating to see patients have hope after they have been suffering the consequences of a disease. If ever there was a sacred goal in genetics, it would be to cure something like this or just delay the progression or enhance the quality of life of these patients.

The chances of long- term success are small, but I want to try. If we fail, I want to be able to say that I did everything in my power to do this and Mother Nature beat me. 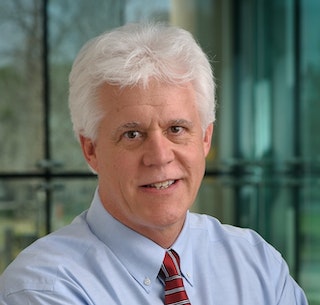