The Disruptive Power of Veterans

An Essay by Colonel Miguel Howe, April and Jay Graham Fellow of the Military Service Initiative at the George W. Bush Institute

Our veterans are an asset to our nation in an age of disruption and conflict. As servant leaders with courage and character, they can provide the guidance and insight needed to work through national issues.

Captain Scott Horrigan from 2-87 INF discussing with leaders what help they can get from the U.S. military to build a new school in their village in Afghanistan on May 6, 2007. (NBC Newswire)

The disruptive forces threatening our freedom, security, and prosperity include any number of physical perils, from the ever-present threat of terrorism to strategic competitors in China and Russia, regional rogue regimes in North Korea and Iran, and cyber-attacks.  We also face challenges to fundamental principles of freedom, including to the venerable belief in the right to a free and fair election.

At the same time, socio-economic discontent is on the rise. Numerous Americans, as well as people across the world, feel that they have not shared in the prosperity that a globalized economy and free trade have brought to the United States and significant parts of the world.

What are we to do?

The way forward on all these fronts starts with effective leadership. Specifically, we need servant leaders who possess courage and character. I have been proud to serve among such leaders during my military career, which is why I believe that veterans can help our nation cope with the disruptive forces that would undermine our way of life.

The way forward on all these fronts starts with effective leadership. Specifically, we need servant leaders who possess courage and character.

America is home today to veterans who have served as far back as World War II, but those still in their prime years of leadership were drawn into service after Sept. 11, 2001. We now have four million post-9/11 veterans. My experiences in Iraq, Afghanistan, Latin America, and elsewhere have taught me that these veterans are warriors and scholars alike.

Their values and character have been tested in battle, but they also have had to build coalitions in hostile environments and solve problems with practical thinking. Think about what it would be like to bring calm to a village in dire need of basic services and infrastructure, from which extremists use villagers as human shields to attack our troops.

Skill like that has allowed post-9/11 veterans to survive and adapt in times of peace and conflict. That’s why American communities, from the tiniest hamlet to the largest metropolis, can now benefit from their leadership. So can our businesses and political arena, whether that is City Hall, the state Capitol, or the corridors of Washington.

As we all know, America faces serious divisions. Veterans, though, have been trained to work in teams with people from vastly different backgrounds. Their comfort with diverse points of views, experiences, and ethnic and racial identities would help them lead communities wracked by gun violence, income inequality, and segregated schools.

Beyond their personal leadership skills, which would help us face seemingly insurmountable differences, returning veterans also have relevant training for these policy challenges:

Harden our defenses at home: Foreign governments and rogue regimes cannot match us directly, so they are waging unconventional warfare. They naturally have military targets, but they also have our financial and political systems in their sights.

As civilians, veterans could help harden our defenses through applying their knowledge to the cyber and technology industries. Similarly, they could use it while working for domestic intelligence and law enforcement entities. And they could apply that knowledge in positions in federal, state, and local agencies whose charge is to protect the homeland.

Project American leadership: The cold, hard reality is that America must lead abroad. If we do not, someone else will. We have learned that lesson the hard way whenever the U.S. has chosen not to lead.

To their credit, veterans have not shied away from projecting American leadership. And while we think of their use of military might to free oppressed peoples, they also have used “soft power” to start schools, create clinics, and build roads in forgotten places.

These same veterans now have the opportunity and obligation to stand up once more for the forgotten around the world. That might mean reminding us all to respect immigrants, refugees, and dissidents. It might mean supporting and holding accountable international institutions that develop destabilized nations. And it might mean pursuing a career in the State Department or at USAID.

Global Competitiveness: It is well documented that America’s economic future rests in our ability to succeed in the areas of science, technology, engineering, and math (STEM). Given their training in running complex supply chains, operating sophisticated machinery, and using modern technologies in their daily work, veterans are well-suited to fill the STEM positions the modern economy demands.

Given their training in running complex supply chains, operating sophisticated machinery, and using modern technologies in their daily work, veterans are well-suited to fill the STEM positions the modern economy demands.

They also call fill key gaps in healthcare, IT, cyber security, and education. And, in the world of business, they can apply their knowledge of the world to cultivate new markets and relationships for American goods and services.

Restore trust in democratic institutions: Polling data shows that Americans are frustrated and distrustful of their government, media, religious institutions, colleges, and businesses. We probably all run across this reality in our own neighborhoods. Here, too, veterans have the tools and talent to lead us forward. General George Marshall, after all, led the greatest institution-building campaign of the post-World War II world.

Today, we could draw upon veterans to rebuild trust through serving in Congress, leading universities, and heading businesses. Not that these men and women are perfect. But they are tested and have been taught to seek the larger good.

Strengthen the American citizen: It is easy to lose sight of the fact that geography, tribe, or ethnicity do not define who we are as Americans. Our identity as Americans is defined by our values and beliefs, the centerpiece of which is the ideal of individual liberty.

Veterans are equipped to help each American understand this point. Whether it’s through teaching, coaching, or mentoring, veterans can model the behavior that can bring Americans back together. I have seen this kind of leadership in leaders like Redmond “Red” Ramos, who has brought people together through his work as a youth mentor with the Travis Manion Foundation. He has taken people from very different backgrounds and united them in developing character in American youth.

Obstacles to using their leadership

Of course, veterans face barriers as they return home. For one thing, many will need access to quality health care, including care that addresses the wounds of war that are invisible to the naked eye. Some will need to strengthen their skills with a college education, a community college degree, or a technical certificate. And all will need the chance to secure a job that allows them to use their talents for the greater good.

Of course, veterans face barriers as they return home. For one thing, many will need access to quality health care, including care that addresses the wounds of war that are invisible to the naked eye.

At the same time, they need to take charge of their own transition, like my friend B.J. Ganem did. He recognized he was suffering from post-traumatic stress and sought care. He now is the CEO of Service Dogs for Heroes.

And there are veterans like Fontaine Wilson, who came back home and promptly used the post-9/11 GI Bill to get a four-year degree. She now is a valve technology engineer at MRC Global. And I recall Kraig Brunner, who used his training in the military to become an underwater welder in New York Harbor. John Raftery went to Syracuse University’s Entrepreneurship Bootcamp for Veterans with Disabilities and combined those skills to found Patriot Contractors in Waxahachie, Texas.

These are prime examples of how veterans have managed their transitions well. They already had faced disruptive forces in their lives, but they now are using their talents to once again to serve and lead. As they do, they will become their own disruptive force in our businesses, schools, politics, among other arenas where they can help us meet our modern challenges. 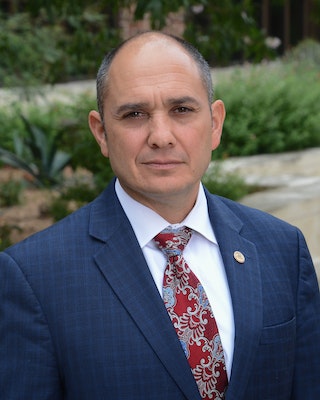