No Margins for Enemies

A Conversation with Gov. John Hickenlooper of Colorado

In the search for solutions to make his state stronger, Gov. John Hickenlooper (D-Colorado) is open to ideas from all corners – and believes partisan politics are secondary to driving the state forward.

The bipartisan pair appeared at the George W. Bush Presidential Center’s Forum on Leadership in April. In an interview with The Catalyst’s William McKenzie and Amanda Huber, Gov. Hickenlooper discussed his approach to governing, which includes remembering what he learned as a Denver businessman. Gov. Martinez shares her views on governing as well in the video below.

You once said there are no margins in the restaurant business for having enemies. Isn’t that hard to do in politics?

You don’t see it very often, but in the restaurant business you do everything you can to make sure that when that customer leaves they at least feel you respect them and care about the relationship. That’s harder to do in politics because people are so vicious and bitter.

During a campaign, you have these attack ads. Your children see these often outrageous lies about you, as if you were plotting to overthrow the state government. Yet attack ads work in politics.

In business, Coke may hate Pepsi, but they’d never do an attack ad against Pepsi. If they did, Pepsi’s sales would go down and Pepsi would have no choice but to do a counterattack against Coke. So, if Coke would attack Pepsi, Pepsi would attack Coke, and this would depress sales in the entire product category of soft drinks.

What we’re doing now is depressing the product category of democracy. Young people are especially tuning out. American democracy is the best form of government, but it is also one of the most fragile. It depends upon people taking the time, learning about the issues, and being good citizens. This vitriol and partisanship is corroding that citizenship.

As someone known for a preference to working things out, how do you lead in a time of such partisanship?

Part of what I’ve been trying to do is to show that you can get more success without the anger. I’ve been reaching out to [Ohio GOP Governor] John Kasich to show that a Republican and a Democratic governor could both say, "Hey, the Affordable Care Act is not perfect and there are a whole lot of things it needs to be successful. But we should not roll back coverage and take seven or eight million Americans and suddenly put them again without coverage."

Is health care one of those issues that has the potential to get people to work across party lines?

I think so. The Affordable Care Act was bitterly fought on both sides but this is a classic case where a large majority of Americans believe that everyone deserves some level of coverage. Maybe not as much coverage as under the law, but pretty much everyone feels that someone should be able to get treatment if they have cancer.

We have to get them from that spot to where they can negotiate the legitimate responsibility of government to provide basic health care and what people are going to work hard for. People want to work hard because they want to have a nicer home or a nicer car, so you don’t want to take away people’s initiative to work.

How does an issue like charter schools play across party lines?

I’m aligned with giving children the opportunities to have great lives, giving them the tools to succeed, and that doesn’t necessarily mean they’ve got to go to college. We’ve got to give them the skills and education to be part of this new economy that’s rising up in front of us.

We’ve got to give [kids] the skills and education to be part of this new economy that’s rising up in front of us.

My son went to a middle school that was one of the worst middle schools in Colorado. Their new principal had the freedom to control the length of the school day, so he extended it by two hours, added another 20 days of school, and paid the teachers a little more. That longer day came with no homework, so those kids would have study halls where they would do their homework.

This was a powerful tool to allow kids from low-income families who were going home to no parent or chaotic households to keep up with their peers. It changed our lives because I no longer had to nag my son if he’d done his homework. We could watch TV, shoot baskets, and do father-son stuff. That innovation came out of charter schools and is now being used in public schools.

My feeling is we need to get more money and more resources into our education system. Last year, we passed a law that says when a community raises their local taxes for their schools, the charter schools in that district have to get their fair share. We’re the only state that’s ever done that. We got that passed because I convinced the teachers union that we’re all in this together.

If we’re going to try and get more resources for teachers, the teachers union and the public school has to look at those teachers in the charter schools as allies, as people who will also work for and lobby for and argue for more resources. We have a lot of public schools where the starting salary for a teacher is $31,000. It’s amazing that anyone does that for $31,000 with a college degree and usually years of training.

Colorado, of course, has legalized the use of marijuana. How does this issue play across party lines?

It’s a great social experiment of the 21st century. It’s such a dramatic social change that many of my older, long-time supporters, who are civic leaders, can’t get their arms around it. It is so deeply shocking to them. Yet younger constituents, many who are under the age of 30 or even under the age of 35, don’t see a big difference between marijuana and beer.

I am very concerned that brain scientists have repeatedly said this high THC marijuana, which is so available, is so intense that when brains are rapidly growing in someone’s teenage years, even ingesting this level of THC once a week will get in the way of the synapses that are growing together. You have a high probability of losing a sliver of your long-term memory.

The kids don’t believe that. But we’re using $8 million a year of the tax revenues from marijuana sales to market to kids and their trusted adults– parents, coaches, clergy, teachers– the nature and seriousness of the risk.

I tell other governors, wait a couple of years. We’re not sure about unintended consequences.  But the old system was pretty horrendous. We sent hundreds of thousands of kids to jail every year, most of them low income, for nonviolent crimes. Now we need them as workers. We’re short in our workforce, so we can’t afford to send them to jail.

What do you see as the role of vision in political leadership? And what has animated your vision as governor and as mayor?

When I was on the outside of government looking in, I thought the job of a governor or mayor was to think and come up with a vision and sell that vision to the community. Now that I’m on the inside, I view it completely different.

My job as governor is to talk to a broad cross section of Coloradoans and let it be their vision. I’m almost like the editor. My vision has to be inclusive of as many different perspectives. I have to be aware of unintended consequences of initiatives, and be thoughtful of how different decisions might affect different constituencies.

My job as governor is to talk to a broad cross section of Coloradoans and let it be their vision. I’m almost like the editor. My vision has to be inclusive of as many different perspectives.

Our economic development plan came from us going to all 64 counties and asking, "What businesses and jobs do you want?" Our vision became focused on less red tape. We heard the state had to be pro-business. We heard that people wanted more access to capital. We had to promote innovation and technology.

We also repeatedly heard that we must have high environmental and ethical standards. And people said they’ve got to believe in their state government.

This became our vision and we really push outside of Colorado that the state is a place for entrepreneurs, a place for young people to come and not just build a business but build a life. That’s been a huge part of the state’s success.

How do you build coalitions in a state that is fairly competitive?

Once the election is over, we’re all on the same team. That’s where that restaurant notion of no margin in having enemies comes in.

After the election is over, I try to put Republicans as well as Democrats in my administration. I’m just looking for talent. I literally don’t ask what someone’s party is when we’re interviewing them.

After the election is over, I try to put Republicans as well as Democrats in my administration. I’m just looking for talent.

What the public wants after the heat of the political battle is for both sides to work out their differences and move the state forward. 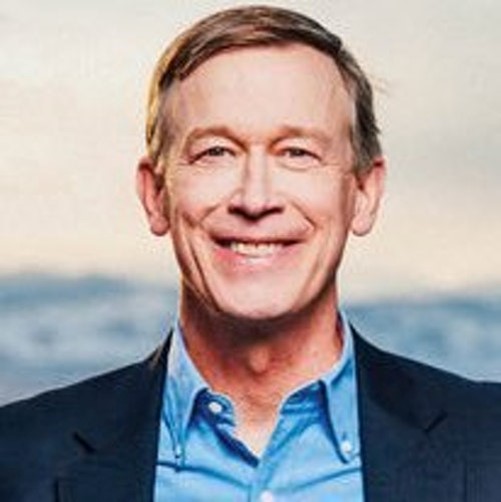