America at Its Best

Private-sector firms big and small are answering today’s COVID-19 crisis with innovation, ingenuity, and generosity. They’re able and eager to play an outsized role for simple — but often overlooked — reasons: They have the know-how and capital to do much of what needs to be done, it’s in their interest to do it, and it’s the right thing to do.

The COVID-19 crisis presents America and its institutions with a severe test, but for many American companies, 2020 may prove to be their finest hour.  Recent private-sector initiatives include feats of monumental inventiveness in health care and technology, as well as simple help for hard-hit Americans. The business community’s response to the crisis is not the result of orders from Washington or state capitals. Rather, it’s a demonstration of the market economy’s power to solve problems.

The initially slow rollout of America’s public-sector testing infrastructure relative to high-performing governments in South Korea, Germany, and elsewhere should not obscure the accomplishments of diagnostics companies over the last four months. Firms started shipping point-of-care tests within six weeks of the first patient, compared to the ten years it took to develop HIV tests in the 1990s. In early February, the only available test was a slow, unreliable technology from the Centers for Disease Control and Prevention. By mid-April, there were 34 FDA-approved private-sector tests on the market.

The initially slow rollout of America’s public-sector testing infrastructure relative to high-performing governments in South Korea, Germany, and elsewhere should not obscure the accomplishments of diagnostics companies over the last four months.

Meanwhile, the biotechnology industry accelerated the process of developing therapeutic drugs for COVID-19 to a pace far beyond all prior experience. Gilead Sciences started trials for remdesivir, a drug that interferes with viral replication but had failed against the Ebola virus, in January. In late April, remdesivir showed moderately positive effects in severely ill patients, reducing death rates among these patients and speeding recovery times. The FDA approved remdesivir for “emergency use” on May 1, just over two months after it started human trials.

New York-based Regeneron Pharmaceuticals will commence trials in June for a promising “monoclonal antibody” drug, complementing the immune system’s natural response to pathogens, aimed at the coronovirus’s “spike” protein. Numerous other antibodies and antiviral drugs are in trials or will be within months.

Pharmaceutical companies are also racing to develop a COVID-19 vaccine, with more than 130 candidates under development. Predictions that there will be a widely available vaccine by 2021 mostly fail to acknowledge how complex the challenge is – and how revolutionary the efforts currently underway. The industry has never launched a new vaccine within two years of identifying the target pathogen. It’s also never delivered a vaccine for known coronaviruses associated with the common cold or for HIV.

But Cambridge-based Moderna Inc. started human trials in March for a vaccine based on a revolutionary technology: instead of growing viral proteins in factories and injecting them to elicit an immune response, Moderna’s technology injects messenger RNA instructing the body’s cells to produce viral proteins themselves. If it works, this technology could transform the world’s approach to vaccines. Just behind, Johnson and Johnson, Pfizer, and Novavax are launching trials with more traditional technologies between May and September. Johnson and Johnson announced plans to ramp up production to one billion doses a year, the fastest expansion of vaccine capacity in history.

Echoing what many said about America’s industrial mobilization for World War II, biotechnology experts have said that Americans may have been slow in taking the COVID-19 crisis seriously, but once the healthcare sector woke up to the threat, its mobilization has been near-miraculous.

Americans have seen countless stories of businesses rapidly adapting to stark necessities. In response to mask shortages, firms ranging from Ohio industrial manufacturers working with Amish seamstresses to a Texas cheerleading uniform maker have scrambled to produce masks. A young fashion entrepreneur designed a medical gown in her parents’ apartment and got a multimillion-dollar contract with New York state within days.

Exxon Mobil and more than 600 whiskey distillers have entered the hand sanitizer business. Ford Motor Company engineers figured out how to manufacture plexiglass safety shields over a weekend after a call from the Mayo Clinic and started shipping thousands within a week. Ford, General Motors, and Xerox retooled to produce ventilators,  pulling dozens of auto parts suppliers into their re-engineered processes with them. As the CEO of Minneapolis-based parts maker Twin City Die Casting said, “The speed this is moving — I’ve never seen anything like it.” 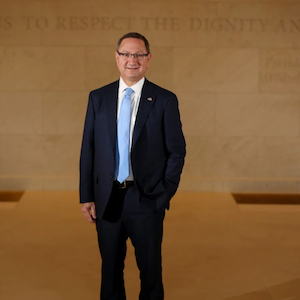 Bush Center CEO Ken Hersh writes in The Dallas Morning News that organizational leaders have had to step up fast in this crisis. And as we transition from shutdown to gradual re-opening, they will have to continue to plan for and react to uncertainty that we haven't seen in generations.
Read the article

Businesses are figuring out how to redesign vital processes in the nonprofit and public sectors. A Texas venture capital firm has offered a challenge grant to mobilize students to develop ideas for re-opening universities safely by August. And investment firms are joining scientists to brainstorm ideas for accelerating development of anti-COVID-19 drugs. The group “Scientists to Stop COVID-19” has helped re-engineer the FDA testing and approval process to rush remdesivir and other drugs to approval.

As remarkable as these adaptations are, some of the most important examples of American ingenuity consist of businesses performing core functions – only faster and at larger scale. In January, 3M launched an initiative to double its output of N95 masks to 100 million units per month by spring, and intends to double production again by early 2021. Amazon hired 175,000 workers in March and April and achieved a historic ramp-up in deliveries of essentials to homebound American families with only minor hiccups.

Ford Motor Company pivoted to making protective and medical equipment. On April 30, they announced they had produced 10 million face shields. (via Twitter @Ford)

San Antonio supermarket company H-E-B came into the crisis with a full-time emergency preparedness team and a pandemic plan dating to 2005. H-E-B quickly expanded its supply chains, adapted to changing customer behavior, and expanded sick leave and other employee safety policies. More than 800 head-office staffers enthusiastically signed up for shifts in stores, incurring personal risk alongside store employees. The company has received rave reviews from customers, including one who expressed appreciation by sending a mariachi band to perform in one Texas store.

Technology companies have been extraordinarily successful in expanding services that Americans have come to take for granted. AT&T, which conducted a pandemic “wargame” exercise in May 2019, has thousands of engineers playing what one called “whack-a-mole” to solve network infrastructure problems threatening the Internet. Cloud services providers Amazon, Microsoft, and Google have made it possible for America to carry out a vast, unprecedented experiment in working and learning from home, mostly by building redundancy and resilience into their Cloud platforms before the crisis. Zoom has scaled up to serve more than 200 million users per day.

AT&T Business CEO Anne Chow discusses how the company is supporting small businesses and education — while also making sure their network adapts to user behavior that changed overnight.
Listen to The Strategerist podcast

Financial firms have smoothly processed trillions of dollars of payments each day. Banks have kept ATM machines stocked with cash and enabled businesses – including more than 2 million beneficiaries of Congress’s “Paycheck Protection Program” – to access much-needed capital in record time.

Businesses have demonstrated considerable generosity during the early months of this crisis. Companies from JP Morgan Chase to Mary Kay have contributed tens of millions to food banks, women’s shelters, and other frontline institutions. Google and AT&T are funding broadband connectivity for remote-learning students. Local restaurants in every city, despite the staggering losses they’re suffering, are sending free meals to hospital workers.

Generosity also means kindness towards employees and partners. Some businesses, such as Raising Cane’s Chicken Fingers, have kept virtually all their employees on payroll even when business conditions can’t justify it. Others — including Marriott and the Gap — are helping their laid-off workers connect with companies that are hiring like Kroger and CVS.

As for treating partners well, Oventures, a Dallas-based maker of stylish O-shaped keyrings, quickly determined that thousands of small bricks-and-mortar retailers stocking the company’s products weren’t in a position to go fully online when forced to close their stores. Oventures created a facility on its own website allowing customers to credit part of any purchase to one of these businesses, as if the customer had bought the product at the store.

Numerous companies have foregone profit opportunities, countering popular caricatures of companies as short-term maximizers. Amazon intends to invest all of the $4 billion in operating profit it expected to make in 2020 in safety measures for its employees. The company has also stopped shipping many high-margin non-essential products to free up capacity for essentials.

Auto insurers like State Farm have given premium refunds to policyholders, rather than pocket the windfall they’re earning because driving activity has plunged. And Johnson and Johnson has promised to deliver COVID-19 vaccines at prices that generate no profits.

Businesses have the ability and desire to pursue these inventive and generous initiatives for five reasons.

First, American companies have unmatched know-how. The purpose of business firms is to bring people together to perform important jobs individuals can’t accomplish on their own. Across every sector, businesses have the expertise to execute countless tasks we commonly take for granted, and also to surge into new activities when conditions require it.

Xerox partnered with Vortran Medical to produce disposable ventilators, expecting to ramp to 150,000 units per month by June. (via Xerox)

Second, businesses have the capital — tangible as well as financial — to take on complex challenges. Today’s capital strength reflects the retained profits of the past and highlights the social benefits of having a highly profitable corporate sector.

Third, successful businesses have their reputation. This enormously valuable asset means people trust them to a significant degree – essential when they’re bearing serious responsibilities in a crisis. It also means companies have a lot to lose if they don’t live up to this trust, so it’s in their enlightened self-interest to take a broad, long-term view of their mission in challenging times, rather than maximizing short-term profits.

Across every sector, businesses have the expertise to execute countless tasks we commonly take for granted, and also to surge into new activities when conditions require it.

Fourth, businesses have competitors, which keeps them honest. Today’s leading companies are the survivors of ferocious competition – a key reason why they have such impressive know-how, profitability, and reputations.

And fifth, businesses ultimately consist of people, most of whom want to help however they reasonably can.

American businesses are rising to the challenge. Some are responding more effectively than others — the very essence of the competitive market economy. But the leadership America has seen from its best companies represents a vital example of America at its best.