The Texas Triangle: An Emerging Power in the Global Economy

COLLEGE STATION— This important new study examines the intricately linked phenomena of interwoven population growth, economic power, quality education, business leadership, and fiscal significance as exemplified in the “Texas Triangle,” a network of metropolitan complexes that are reshaping the destiny of Texas and adding a strong pinnacle in the global system of economic mega-centers.

The Texas Triangle consists of three metropolitan complexes: Dallas–Fort Worth at the northern tip, Houston-Galveston at the southeastern point, and Austin–San Antonio at the southwestern edge. It consists of four US Census–designated metropolitan statistical areas and includes 35 urban counties that comprise those areas. The Texas Triangle soon will include four of the ten most populous cities in the United States. Together these metro areas represent the fifteenth largest economy in the world.

The authors describe the trajectories of each of the Texas Triangle metros in which they live and work and integrate them into a larger dynamic of functioning cohesion and effective collaboration. The Texas Triangle offers community leaders, elected officials, policy makers, and others a more  nuanced understanding of an important moment in America’s continuing urban development. With broader perspectives for how community-building advances the public interest, this book lays important foundations for matching the path of economic prosperity to an informed sense of what is possible.

HENRY CISNEROS, formerly mayor of San Antonio, served as the Secretary of Housing and Urban Development during the Clinton administration, 1993–97. He is chairman of American Triple I, an infrastructure investment firm. DAVID HENDRICKS recently retired after more than 40 years with the San Antonio Express-News, where he had been a business editor and columnist. J. H. CULLUM CLARK serves as director of the George W. Bush Institute–SMU Economic Growth Initiative and is also adjunct professor of economics at Southern Methodist University. WILLIAM FULTON serves as director of the Kinder Institute for Urban Research at Rice University. The former mayor of Ventura and director of planning and economic development for the City of San Diego, he is also the author of The Reluctant Metropolis.

The Texas Triangle: An Emerging Power in the Global Economy 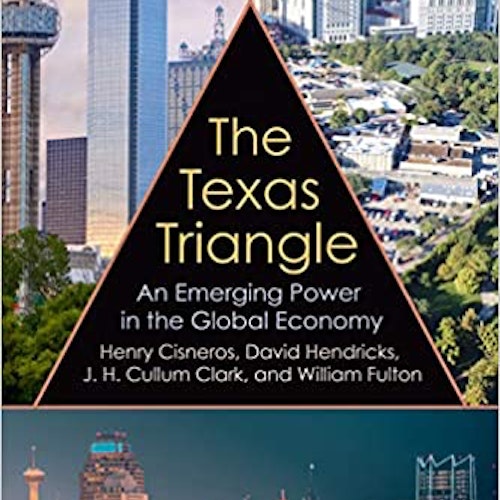 The Texas Triangle: An Emerging Power in the Global Economy An important new study examines the intricately linked phenomena of interwoven population growth, economic power, quality education, business leadership, and fiscal significance as exemplified in Dallas–Fort Worth, Houston-Galveston, and Austin–San Antonio. Get the book