Today, Mrs. Rula Ghani, First Lady of Afghanistan, visited Mrs. Laura Bush at the Bush Center for a day focused on the progress and future of women in Afghanistan.  After a private meeting, the women will both attend a meeting of the U.S.-Afghan Women’s Council. Later this evening, Mrs. Bush will accept the degree of Doctor of Humane Letters from the American University of Afghanistan. 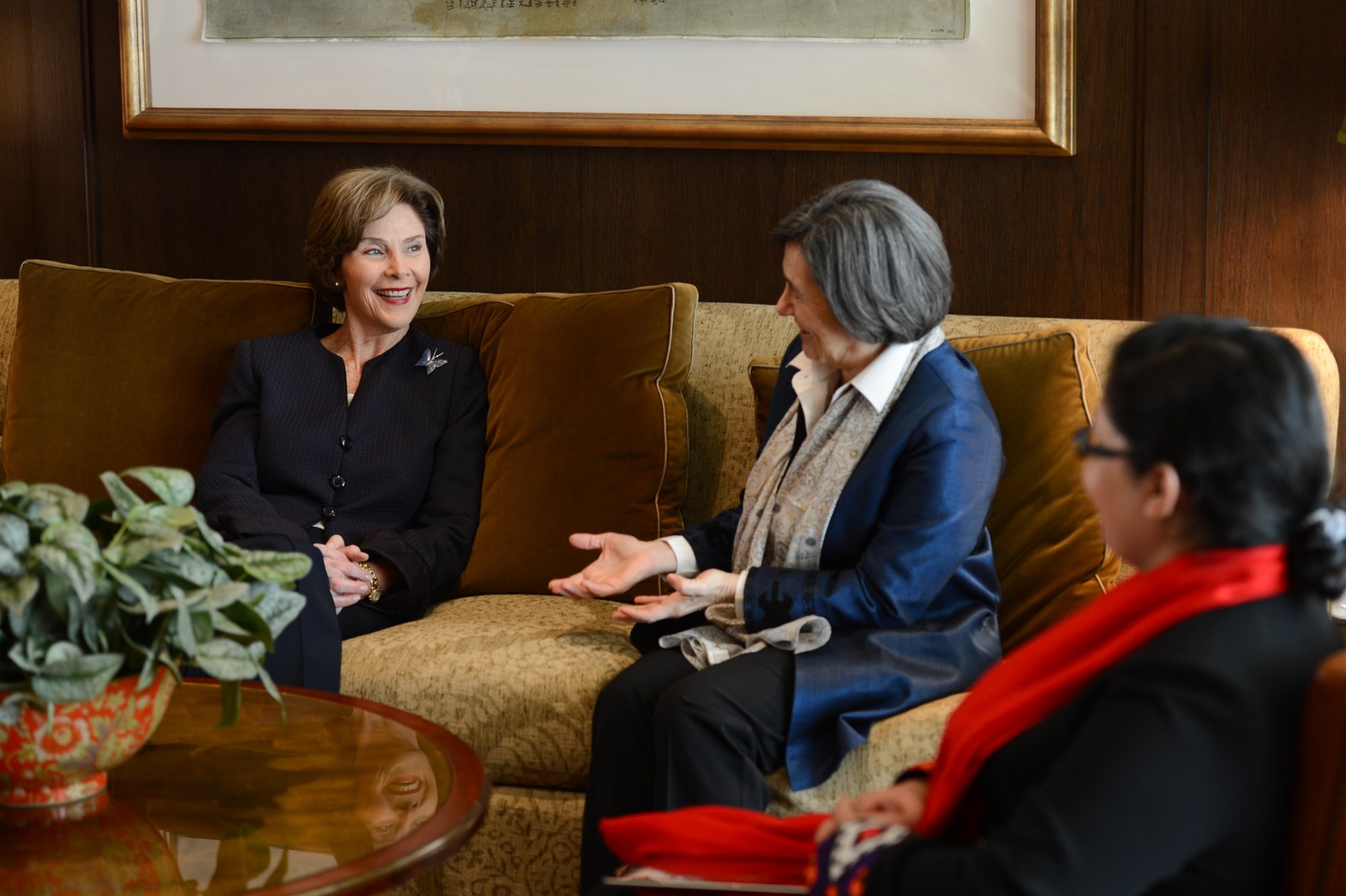 At the George W. Bush Institute at the Bush Center, Mrs. Bush serves as the Chair of the Women’s Initiative, which works to empower women around the globe. In 2010, the Bush Institute launched The Afghan Women’s Project. The goal of the program is to spotlight the successes of Afghan women by telling their personal stories, examine the stakes for Afghan women in reports and white papers, encourage sustained commitment to Afghan women by highlighting effective programs in Afghanistan, and encourage the U.S. and Afghan governments to sustain gains for women by using President and Mrs. Bush’s voice and convening power.

The U.S.-Afghan Women’s Council (USAWC) was founded in 2002 by Presidents George W. Bush and Hamid Karzai as a public-private partnership.   The USAWC is homed at Georgetown University and is co-chaired by the President of Georgetown University, the U.S. Ambassador-at-Large for Global Women’s Issues, the Afghan Minister of Foreign Affairs, and the Afghan Minister for Women’s Affairs.  Mrs. Laura Bush, Secretary Hillary Clinton, and Mrs. Rula Ghani, First Lady of Afghanistan, serve together as Honorary Co-Chairs.

The mission of the USAWC is to mobilize resources and encourage partnerships in support of Afghan women and children in the areas of education, health, economic empowerment, leadership development, and humanitarian assistance.

On July 10, 2014, Dr. C. Michael Smith, then President of AUAF, sent a letter to Mrs. Bush on behalf of the AUAF Board of Trustees to confer upon her the degree of Doctor of Humane Letters. On December 5, 2014, Leslie Schweitzer presented the honorary degree to Miss Onaba Payab, who accepted the degree on behalf of Mrs. Bush.  Miss Payab was the female undergraduate student with the highest GPA. Upon accepting the award, she said, “It is the greatest honor in the world for me to accept this honorary degree on Mrs. Bush’s behalf to be presented to her in person later.  On behalf of all the students at AUAF, thank you, Mrs. Bush, for caring about us and for all you have done for this university.”